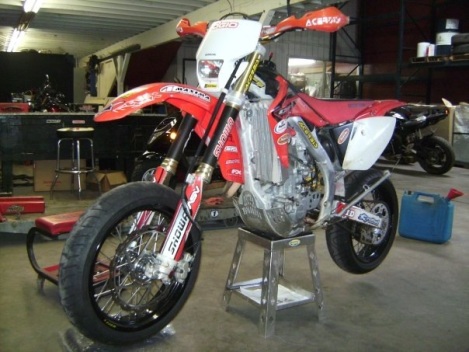 Yep, I did it and the Intern AKA Safety Sally was not thrilled. With that said let me tell you what hair-brained idea I had this time.

or in the dirt oh yeah, I did go through a three-wheeled stage too, but that is for another time. Okay back to giving the Intern grey hairs. We were living on a little island called Maui at the time and we were both working for a small bike shop. We rarely took a day off because working around bikes every day, for me at least, really wasn’t a job it’s what I love to do. Every so often, the Intern would get me away from the shop and we would hit the beach. We both love the beach and would hangout there until dark. You may have even spied a bottle of pineapple wine close by. As I was sipping on my glass of wine and watching the waves come to shore I was thinking: I wish I could just ride my dirt bike to work tomorrow.

Yeah I know, I have a problem. That’s one of the reasons why the Intern was never worried if one of the tourist in a bikini walked by and I had one of those glazed over looks about me. She knew I had dirt bike on the brain and I was more then likely planning my next adventure.

She was right. I was planning my next ride and I wanted to ride my dirt bike to work. There are a few perks to working at a bike shop. One, you can usually ride any bike in the shop when ever you want. Two, in a bike shop you have access to any and all parts you may need.

Back to the beach. I was reminded of an old television show that I used to watch as a kid back in the 70’s call Wide World of Sports. They aired this one crazy event that I just couldn’t get enough of called Supermotard.  It was guys on dirt bikes that had turned their bikes into a super bike that would race on the dirt and pavement. It was crazy at the time but I was still intrigued with it all these years later.

I waited until the Intern had just taken the sip of wine when I sprung it on her.

I said, “I’m going to motard my dirt bike and start riding it to work.”

Yeah I might have struck a nerve again but as luck would have it, she’s pretty use to it. After she finished swallowing the the whole glass of wine, she asked a fatal question.

There it was that look? You could see it in her eyes she was thinking, why did I ever ask this question?

The next day at work I was burning up the phone talking to our parts suppliers and ordering all of the parts I would need to turn my dirt bike into a motard bike.

With my bike turned into this thing the Intern liked to call the half-breed. I was all smiles after it was done and I couldn’t wait to tear it up on the streets. With the Intern standing at the bike shop door shaking her head I was off to have another new adventure around the island. Well the adventure didn’t take long the island isn’t that big, but I still had a huge grin on my face while riding it.

As soon as we moved back to the mainland Safety Sally somehow convinced me that it was my idea into stripping the bike down sell the motard wheels and to just go dirt only again. I’m pretty sure she has some super power to make me think I come up with all these ideas myself. Still to this day I don’t know how she does it. Maybe she knows I’m not a big fan of riding in the rain and she used that as my kryptonite. Any way you look at it I still remember how much fun I had riding around the island.