Team Banana! Whose idea was that?

There is a little race close by that Girlfriends and I like to do every year because we can participate as a team. Even though we are as one at this event it doesn’t mean we don’t race each others times or as we like to call it, Trash Talk.

How we came up with our team name you ask? Well, it all resorts back to the trash talking. If you have read the Trash Talk post you can the understand why the four of us can’t have a serious conversation with out someone talking trash. Getting back to the team name. We stood there waiting in line to register and one of the racing staff asked for our team name. This is so us we are about to sign up for this event and we didn’t even take the time to come up with a team name. As we stand there dumb founded, looking at each other knowing one of us should at least try to say something brilliant, someone blurted out Team Banana!

“What the hell,” the three of us asked in unison?

We didn’t have time to argue among ourselves because the line was long and the officials were already handing us our numbers. As the four of us walked away and back to the pits we couldn’t stop laughing about our team name.

We looked to the culprit that blurted out team banana and asked, “What were you thinking?”

He began to tell us his logic behind the name the name we have been know as for awhile now. He stated that he was thinking about the first time he laid eyes on my cousins new Husqvarna. The color of his bike which was white, blue, and yellow and when I say yellow, it had these bright yellow spoke covers on both wheels. So, of course the trash talk started and we had a nickname for his bike. You guessed it, the Banana bike was born. I’m still not sure to this day why that name stuck. I’m sure we might have had a liquid beverage at the time.

Back to the race. Now as you all know the Intern doesn’t really care for this sport. Bless her heart, though, she is my biggest fan and cheer leader. She supports all my antics and adventures with this activity I love so much. She truly thinks we are all crazy, but I have somehow talked her into helping us out as our pit crew. She is the one to make sure we have fuel for the bike and ourselves. She is in charge of the first aid kit as well. She’s the one that keeps our lap times too. It’s because she is the only one we can trust. If it was up to us, well you know where that would end up. She does have a pretty good time out there with us even though she tries not to show it.

As were getting ourselves ready for the start of the race the question arises, “Who is going to start us out?”

This is a team race and we do need to figure out where we all will line up in this four hour endurance race. Somehow I was elected to start us out. So my adrenaline was pumping through my veins as I was going over the bike making sure I hadn’t forgotten to tighten a bolt or yes it’s happened, make sure the bike has fuel.

Now as we lined up at the starting line a million things were going through my mind. The biggest was I wanted to have a good start and not disappoint the Girlfriends, Intern and most of all not look like a total goof in front of the crowd. So this is where you think we would be sitting on our bikes revving the engine in the go position right?

This was a four-hour endurance race and they rarely begin without some sort of shenanigan.

So, with that said, the race official made his way up to all of us and said. “Cut the engines and get off your bikes.”

He then explained, for the start of the race, we will be standing behind our bike with the engine off holding only the rear fender with both hands.

Okay I got this, I thought. And then suddenly realized, wait! This is not good, even though my bike has electric start…that is not always a good thing. If the piston was in the wrong position the bike would not start. Now my heart was in my throat. This could and would go one of two ways: I will either look like I know what I’m doing or, well you know.

As the race official walked back to a safe place to drop the start flag I could feel my heart beating through my roost guard. He dropped the flag and just like those cowboys in the wild west movies, I jumped over the back fender and landed perfectly in my race stance with my thumb on the start button. As I pulled the clutch in and hit the start button I heard that old familiar sound “click.”

The bike was not firing.

Panic set in and what seamed like an eternity was actually just a second or two. I was able to get the bike started and head for the first corner. I was in third place. I remember telling myself that I was in a good place to start because I would be able to watch the lines the rider ahead of me took and learn from that. Either stay with them or choose another line.

Now, unlike a motocross track, this race was held on what is called a single track. This type of track is just wide enough for one bike, so you need to be creative on how to pass another bike. You must be overtly aware of the obstacles you may encounter; such as big rocks, logs, ditches, water, and trees just to name a few. Especially while passing other riders. The course is anywhere from 5 to 15 miles and you complete as many laps as possible in the time frame. Our race was a total of 4-hours. 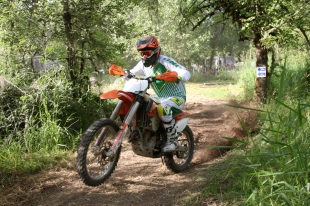 Before the race had started, we all agreed that we would each do two laps before we pit and the next rider would take off. It sounded like a good idea before any of us actually rode the course, but as I got to about the 3/4 mark in the track I start to remember how old I was. I forgot how exhausting a race like this can be. By that time. my hands hurt and my arms were starting to feel like jello.  I know, though, if I give into the exhaustion I will never live it down. I stopped at the check point and I could see the pits up in the distance. I could just make out my team as they were standing there watching while the official recorded my lap time.

I remember the Official telling me I was in second place, and only 10 seconds behind the rider in first place. At that moment I could feel a second wind coming on and I was instantly rejuvenated. I rode passed the pits with my teammates and the intern cheering me on. As I came in to the pits off my second lap and passing off to one of the girlfriends I could hardly stand; I was spent. I dropped to my knees and took my helmet off. I was downing a Gatorade when I asked the intern how my lap times were. Like a good intern should, she was kind enough to point out how sweaty I had become so dehydrated that I had a huge vein in my forehead that was freaking her out.

Then she smiled at me and said my times were pretty good, but to pace myself as this was a four-hour race. I started to feel better and more relaxed and the Intern piped up: don’t  get to comfortable you have to ride again. Thanks, Intern for the update. 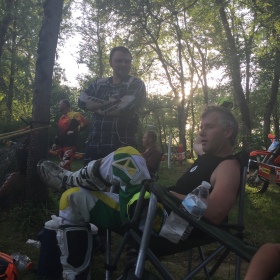 Daylight turned to darkness, because someone thought of the brilliant idea to race through the trees in pitch blackness was fun. I can honestly tell you when you are riding through the trees as fast as you can with only a small stock headlight on your bike it becomes very sketchy. 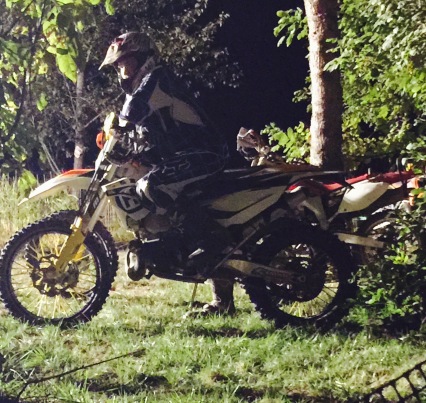 By the end of the race, the four of us could hardly hold on to our bikes. We waited for the race results to be announced. We sat there with grins on our faces and a well deserved beverage telling each other stories of the obstacles, and other racers that we had encountered through out the race.

We placed 2nd that night and had the time of our lives. 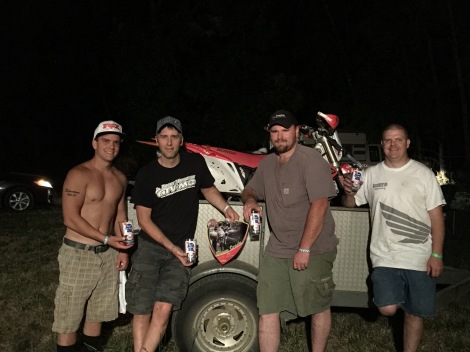 If you would like to know more about this race, or others in the area, checkout Spoon Creek OHV on Facebook here.

Hopefully we will see you and your team at the races!

Until then, get out and have an adventure.

**Be sure and click on the hyperlinks throughout the post. They are underlined and sometimes a different font color. It’s a story within a story! You can also find us on Facebook by clicking this hyperlink. Are you on Instagram? Me too. Find me over there @weadventurenw